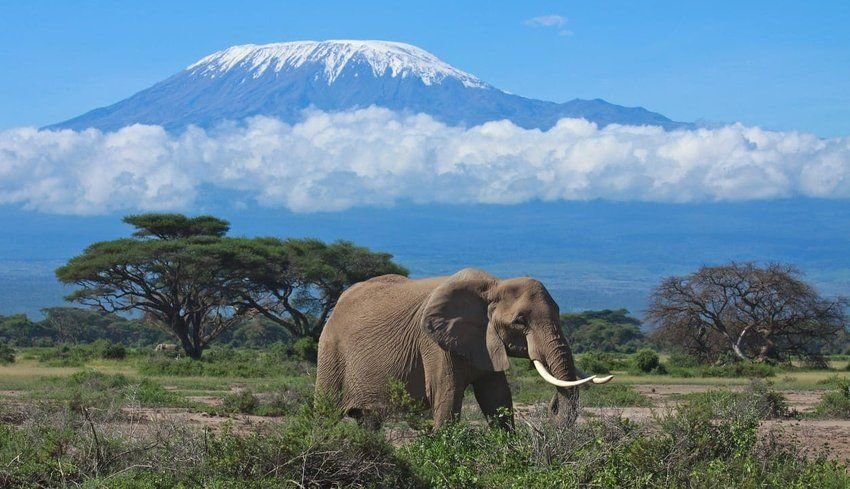 When planning that adventure of a lifetime to the wild continent of Africa, most travelers will be thinking of setting off on a safari in search of the “big five” of African wildlife or exploring the souks in the markets of Marrakesh. There is, however, a wonderful surprise waiting for those who love the thrill and breathtaking views you can only find from atop a mountain peak. So why not set your sights a bit higher?

From the snow-capped peak of Kilimanjaro to the unusual diverse ecosystems of the Simian Mountains, Africa claims some of the most amazing mountain climbs on the planet. You can set out in the morning, hiking through tropical rainforest and end your trek the next day enjoying cocktails on a glacier. Whether you are a nature lover or hardcore mountaineer, be prepared to be astounded by these 5 breathtaking mountain climbs of Africa.

Topped with an everlasting snow-cap, Kilimanjaro (a Swahili word for freedom) is the mother of all African peaks. Once you have made it to the summit, you will be standing at Africa’s highest point—more than 19,000 feet! The summit is considered the “Roof of Africa” and your climb will take you through five different climatic zones ending at Kibo, the summit of Kilimanjaro where you will find arctic-like temperatures around its glaciers.

You won’t be alone on your climb; Kilimanjaro is Africa's most-visited hiking destination. Even better news for the novice climber, you don’t need to be a mountaineer to summit this famed mountain—just physically fit. You can choose one of six routes that match your skill and determination. There are many companies that offer guided treks but try Thomson Safaris-Kilimanjaro. They claim a 98% summit success rate and have some of the most well-trained and experienced guides in the business.

Stretching 125 miles along the border between Lesotho and South Africa is the awe-inspiring and truly magnificent Drakensberg’s or “dragon mountain.” This range is popular among passionate hikers of the world because of its sheer majesty, its accessible plateau and the abundant passes and slopes that make for some of the best climbing in Africa.

Climbers flock to get a glimpse of Drakensberg’s famous mountain peaks, Giants Castle and Cathedral Peak, but are also drawn to its foothills that are riddled with incredible waterfalls, rock pools, mountain streams, and prehistoric caves. If you want to be in the heart of all the action, Giants Castle Main Camp is a wonderful place to call home while you explore all the Drakensberg’s have to offer.

Standing on the summit of Mount Kenya, you would swear you're on Everest and not just south of the equator. At 17,000 feet, Mount Kenya is Africa's second-highest peak and its glacial valleys, lush alpine meadows and diverse wildlife will guarantee you magnificent scenery and a trekking experience that is out of this world.

Since Mount Kenya is considered the most technical climb in Africa, you'll need to do some serious planning and hire an experienced guide to get you to the mountain's steep ice-capped peaks. Be prepared, at the crest temperatures rarely rise above freezing. Since there are quite a few routes to the summit, plan accordingly because most of them take between three and seven days to conquer.

Nestled in the highlands of northern Ethiopia, you'll find the spectacular Simien Mountains. This jewel of an area seems lost in time with its remarkable rock-hewn churches and medieval castles. The mountains are also home to a rich cultural heritage that has drawn people here to learn about ancient religious sites and to witness the jagged peaks of lava and seemingly endless vistas.

The Simien Mountains are also home to a distinctive ecosystem complete with unique and unusual animals like the Gelada Baboon and Walia Ibex. Once you have reached Ras Dashen, the highest peak, you will be able to marvel at Gondar, the “Camelot of Africa.” The castle was the medieval home to Ethiopian Emperors and Princesses who led the country from the 12th century to the late 20th century.

Although this is not your typical mountain climb, the chance to trek through the tropical rainforests of Uganda just to get a glimpse of the rare Silverback Mountain Gorilla is a once-in-a-lifetime adventure. The Bwindi Forest in Uganda is one of only two prime locations in Africa for tracking mountain gorillas. This tiny portion of our world hosts almost half of the world's population of wild mountain gorilla, with over 400 gorillas in 20 groups, called “troops.”

You will need to carefully plan if you want a chance at spotting these amazing primates because a very limited number of gorilla tracking permits are issued each day. Only 9 troops are adapted to the presence of humans, which means that they can usually be approached without being scared off. So, book early and pay up front if you want to secure a spot to visit the most interesting and accessible gorilla families in the world.