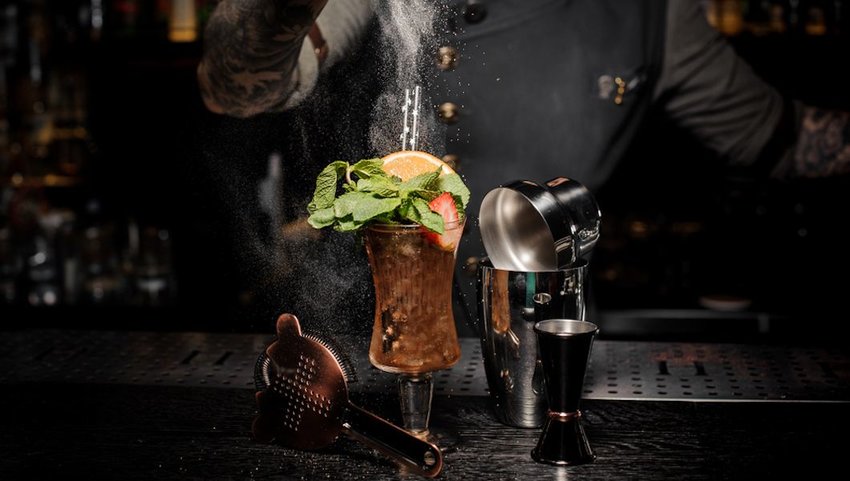 5 Coolest Secret Bars Around the World

During Prohibition in the United States, it was imperative to keep cocktail hour under wraps. So, 1920s party people took their shenanigans underground in ingenious ways, with deeply disguised drinking dens, trick entrances and secret passwords.

Today’s modern incarnation of the speakeasy isn’t necessary for legal reasons, but these bars are equally adept at clever concealment — for the sheer fun of it. The following drinking establishments have unique hidden entrances for those in the know. Fake phone booths and false bookshelves lead to clandestine taverns, but the following places offer a variety of new takes on the speakeasy theme with their mysterious means of entry. Although the spirit of secret drinking from a bygone era is invoked, the spirits in the cocktail shaker are anything but Prohibition “bathtub gin” and bootlegged booze. The rule at these posh places is bespoke drink recipes expertly executed with modern mixology.

Most passersby probably think the steep steps leading below street level are a disused subway entrance or tube station. Well, they're close, in some respects. The mystery stairway leads directly down to the door of a former London public loo, through which today’s patrons slip into Ladies & Gents, a chic club that now has multiple locations throughout the city. The original, hidden lounge with Victorian water-closet entry was opened by a prominent spirit distiller, and it now has its own gin-making program. Groups of up to 10 can book a gin-making class, and each student goes home with their own, handmade bottle. As for the drinks at the stylish, minimalist bar, quality ingredients are highlighted on the menu of homemade liqueurs, syrups, botanicals, bitters and herbs. Reservations are strongly suggested.

Reservations that prompt you to retrieve a secret password? Hmmm. Anonymous announcements to show up at a certain time at an unmarked entrance in San Francisco’s Tenderloin District? Even more curious. Bourbon & Branch is not so much a secret as a fun re-enactment of a Prohibition-era speakeasy with modern twists and turns. Along with the allure of intrigue comes dark decor and a thick cocktail menu full of complicated, delicious, award-winning drink recipes. However, the secrets keep coming. Further ensconced within the incognito space are additional hidden watering holes: The Library, Wilson & Wilson and Russell’s Room. Bourbon & Branch holds yet one more mystery. Under Russell's Room, the Ipswitch is a tiny, ultra-VIP saloon with a two-stool bar and attendant Western decor. Ipswitch access, apparently, is granted only to patrons who have booked a large, private party elsewhere in the building.

This place gets props just for its ingenious name, a direct nod to the pre-Prohibition law that tried to make drinking illegal in the Big Apple. It obviously didn’t work, but by name-checking the lacking legislation, the Raines Law Room earns instant cred in the speakeasy realm. Entry is gained at the Chelsea location simply by ringing the bell at the pseudo-secret entrance. Once within, you’re enveloped by a sumptuously appointed lounge with a vintage vibe and carefully curated cocktails. A second location, within The William Hotel, pours drinks crafted with equal care in a retro-chic library setting.

“Hidden” behind a nondescript white door in a bustling district of Singapore, 28 HongKong Street delivers a Western speakeasy experience not far from the city-state’s House of Parliament. The lavish lounge’s dark lighting and decor speak to secretive activities and hushed conversations. The drinks, however, speak volumes. The cocktail program here is the work of world-renowned mixologist Logan Demmy. Favorites from his repertoire include 28 Days Later, a tiki drink with oversized umbrella and an infusion of tropical fruit and rum; or the Crimson and Clover, a gin cocktail built with fresh berries, lemon juice, thyme and basil.

After sneaking through the walk-in cooler of a florist/wine shop, descend into this cloaked drinking establishment down a steep, hidden stairway to find a unique Latin take on the speakeasy. Floreria Atlantico brings its own flair and warm ambiance to the hidden bar scene. The sort-of secret Buenos Aires establishment near the city’s docks plays on local history, with decor and themes that recall immigrants who contributed to its drinking culture. Beer from Germany, wine from Spain, Italian liqueurs, English and Dutch gin, Cuban rum and Peruvian pisco all figure in, along with American bartenders who brought cocktail culture. Today that delicious melting pot is seen through the lens of a cocktail shaker, and Floreria Atlantico is well worth searching out as one of the most highly rated bars in South America.