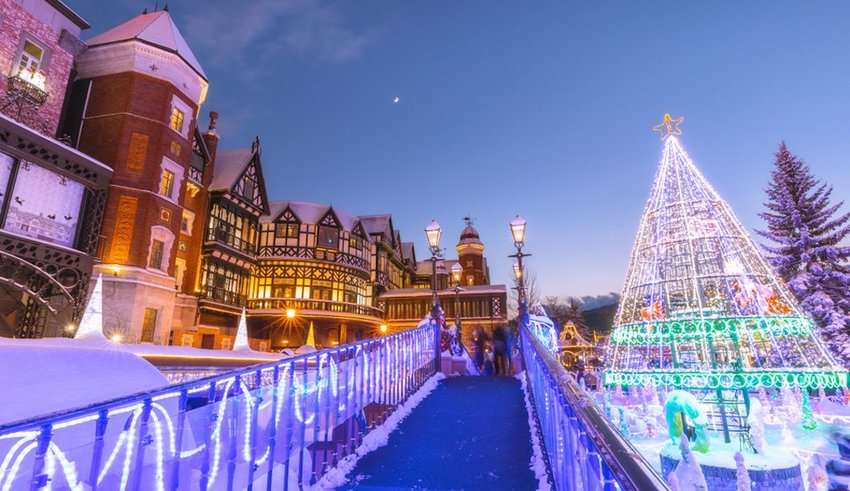 25 Must-Attend Winter Events Around the World

Winter may seem like a time to stay indoors and hibernate, but these towns know that the best way to celebrate the coldest months of the year is by getting out into the snow for festivities. Whether it's a cultural celebration, natural phenomenon, or big ol' party, here are 25 events happening around the world this winter that you should plan to check out.

In addition to the below special events, December is also a spectacular time to visit the magical Christmas Markets of the world. Cradle a mug of glühwein and stroll the stalls of these magical markets to get into the holiday spirit.

The city of Amsterdam is breathtaking at any time of year, but it’s especially magnificent when draped in lights. The Amsterdam Light Festival exhibition runs for 53 days and features 25 light artworks across 10 city stories. You can admire the display from the streets or take to the canals for a unique view of the lights.

Transport yourself back a few centuries when you visit Williamsburg and experience a Colonial Christmas. Enjoy the holiday the way it was celebrated in the early days of America. Listen to traditional music while learning more about the history of the holidays in the Jamestown colony.

This festively-named island is famed, not as the home of Santa, but for the truly-incredibly spectacle that is the red crab migration. Each year, millions of red crabs scuttle across the tiny island to breed and spawn. Exact dates for this phenomenon are hard to predict, but late-December is typically a good bet for witnessing this migration.

This year’s opening ceremony has the theme “Pearl on the Crown of Ice & Snow”, so that should quash any worries you may have about how magnificent the Harbin International Ice and Snow Sculpture Festival is. Gaze at the ice lanterns and sculptures while enjoying fireworks and winter sports like sledding and swimming.

Head up to the far north of the globe for the Tromsø International Film Festival and watch new flicks on a series of outdoor screens around the city’s main square. Because the hours of daylight are so short this time of year, screenings of short films, documentaries, and independent films can be shown outdoors for the majority of the day.

Everybody knows that the Swiss Alps are a dream destination for all sorts of snowy activities, so it should come as no surprise that one of the best events in the country is a snow festival. Each year, the village of Grindelwald hosts sculptors from around the world who carve art into the ice and snow, creating the world’s most interesting backdrop to an après-ski.

The great frozen north celebrates in style with the Ice on Whyte Festival in Edmonton, Canada. Amateur sculptures can learn to carve ice, and those who would rather keep the sharp objects out of their own hands can enjoy food and warm drinks while admiring ice sculptures made by the pros. As they say, “the real fun starts when temperatures drop below zero.”

Plungefest isn’t just a great chance to jump into freezing cold water. This winter celebration is hosted by Special Olympics Maryland and gives everyone an excuse to celebrate winter in style, with local food and cocktail vendors, live music and plenty of entertainment in the heated ice lodge.

The town of Ouray nestled in the southern mountains of Colorado is an ice climber’s delight, and this festival fills the Uncompahgre Gorge with the sport’s best and brightest. The Ouray Ice Festival is a dream come true for outdoor enthusiasts who can spectate or participate in ice climbs, demo the latest gear, and enjoy food and music in the scenic San Juan Mountains.

The citizens of Cordova launched this festival back in 1961 to celebrate winter and lift their own spirits during the darkest months of the year. It’s named after the resilient little worm that, much like the residents of Cordova, finds a way to thrive in the glacial environment. The festival’s largest event is the iceworm parade, complete with a long and trailing iceworm costume worn by a veritable conga line of people.

Summon your inner Viking and join the community of Lerwirck in the Shetland Islands of Scotland as they celebrate their ancestry with one of the most impressive fire festivals in Europe. Up Helly Aa is a single day event that includes traditional costumes, marches, and a torch-lit procession that ends in the lighting of a traditional Viking longship.

Take a long weekend and enjoy some fine wine in the snow at the annual Taos Winter Wine Festival. Attend wine seminars between hitting the ski slopes or wandering through art galleries and enjoying the unique flair of New Mexico. The weekend wraps up with a Grand Tasting event highlighting more than 150 wines and food from the top restaurants in the Taos Ski Valley.

What began as some high school students making snow sculptures back in 1950 has turned into a massive celebration of the intersection of snow and art. The Sapporo Snow Festival fills Odori Park with sculptures made out of snow and ice that are illuminated after dark for an even more magical experience. Visitors can even go ice skating or enjoy the winter playground constructed entirely of snow.

Reigning strong as the oldest winter festival in the eastern U.S., the Saranac Lake Winter Carnival boasts that it’s the most fun you’ll have all winter. Take part in the snowshoe races, fry pan toss, or snow rugby game before attending the Firefighter’s Broom Ball or watching some fireworks while sipping a nice warm drink.

Whether in Venice, Rio do Janeiro, New Orleans, Cologne, or any of the other dozens of cities around the world that host celebrations, Carnival is an easy headliner for any list of winter events. Also known as Mardi Gras, this festival takes place in the pre-Lent time and is a celebration of the indulgence that will be missed during the fasting season. Dancing, parades, and elaborate costumes are all trademarks of this event, though each city puts their own unique spin on the fun.

The three-week music festival of Vinterjazz showcases hundreds of artists across various cities in Denmark, from the jazz capital of Copenhagen to Aalborg and Helsingør. The participating cities change each year as independent musicians and organizers choose to take part in the celebration of Danish and international jazz.

Located up in the arctic north, the already-gloomy winter season is especially dark in Iceland. Celebrate the coming of sunnier times at the Reykjavik Winter Lights Festival, where the elusive Aurora Borealis isn’t the only thing lighting up the city (though if you’re lucky, you might see that too). Visitors can even experience the museums and thermal pools of Iceland for free.

Want a winter festival with a mascot? The Quebec Winter Carnival with its snowman mascot, Bonhomme, is the place for you. There are activities for everyone to enjoy from axe throwing to canoe races, and there are even ice sculpture workshops for those who’ve always wanted to learn how to make art out of winter.

Join in with the rest of Whitefish to banish the Yetis back to the hills during the Winterfish Winter Carnival in Montana. The legend goes that a Viking god name Ullr once reigned over winter and eventually settled over the town of Whitefish as their patron saint. Celebrate winter with Ullr by taking the Penguin Plunge, participating in ski joring or attending the disco party.

Head to the south of Norway for an experience that can only take place where it’s frozen – the playing of ice music. Not only are the musicians performing at the Ice Music Festival in Finse surrounded by the cold, they play on actual instruments made of ice. It’s a unique opportunity to experience the true art that ice can produce.

Polar Pete is a lumberjack legend in Minnesota, and every year the residents of Detroit Lakes join him in celebrating winter by plunging into the icy waters. The Polar Fest is an embrace of everything frozen, from golfing on the frozen lake to the “Freeze Your Buns Run” 5K race. The entire festival culminates in a fireworks show and the dreaded (or celebrated) polar plunge.

This lemon festival in the French Riviera was started in 1895 as a way to stay entertained during the winter months while celebrating the region’s main fruit, the majestic lemon. It grew popular with winter tourists and today is celebrated with giant sculptures made entirely of lemons that fill the town of Menton with the clean, crisp scent of citrus.

In the last week before Lent, the town of Mohács in Hungary becomes a unique explosion of tradition as villagers don costumes to scare away winter and welcome the coming spring. Busójárás is a week of wine, music, and scary monster masks that draws everyone in to participate in the celebration.

The Fur Rendezvous (or Fur Rondy as the locals call it) is the biggest winter festival in Anchorage. What began as a sports tournament has turned into a celebration of the rich traditions and deep resilience of the people of Alaska, and the events that take place today highlight what makes Alaska unique, from Alaska Native traditions like the Blanket Toss to the Running of the Reindeer.

One of the quirkiest mountain towns in Colorado hosts one of the most unusual winter events each year, complete with coffin races and snowy human foosball. Frozen Dead Guy Days has taken over the town of Nederland every winter for years, and yes, it is all in celebration of an actual frozen dead guy. Grandpa Bredo Morstol cryogenically watches over the frozen festivities every year from his dry ice bed in the family’s Tuff Shed.