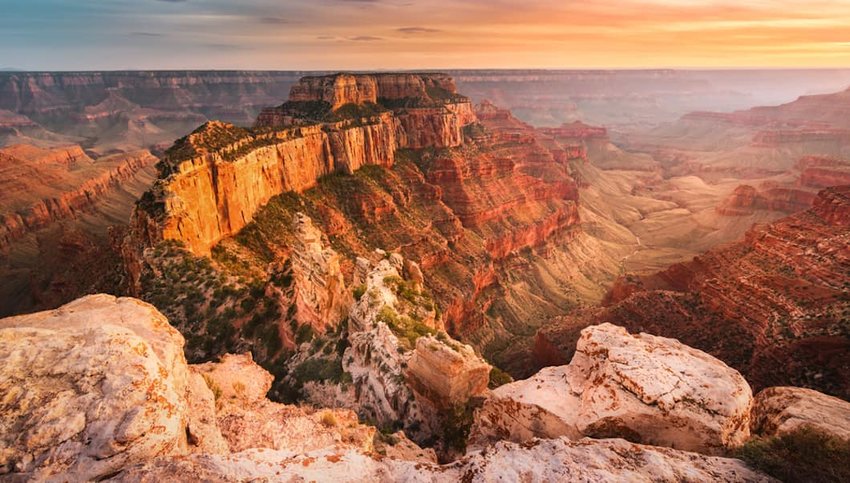 25 Classic American Landmarks To See Before You Die

From natural wonders to manmade marvels, the United States is home to some pretty iconic landmarks. From coast to coast you'll find spectacular sights, but there are a few that stand out above the rest as quintessentially American. Whether you're a first-time visitor to the States or a born-and-raised American, make sure you check out these 25 classic American landmarks in your lifetime.

It took a thousand years for the Colorado River to carve one of the most spectacular canyons in the world. Spanning over 200 miles and with incredible vistas at every turn, there’s no part of this massive natural landmark that isn’t worth seeing. Hike it, raft it or just stand at the edge and hold your breath — there's no wrong way to appreciate this canyon's beauty. Depending on your sleep habits, make time to watch a sunrise or sunset over the canyon at these prime locations.

There’s perhaps no American landmark more iconic that Mount Rushmore. A giant, mountainous sculpture of some of the most celebrated U.S. presidents, it took workers fourteen years to complete the project. Each president’s face measures approximately 60-feet high and the effect is so staggering, it has to be seen in person.

Utah’s Arches National Park is a worthy vacation destination, but if you only have time to see one landmark within the park, it has to be the Delicate Arch. The magnificent natural wonder is an easy 1.5-mile hike into the park and provides arresting views of the sandstone bowl and the breathtaking Utah landscape.

At one time the longest suspension bridge in the world, the Golden Gate Bridge is every bit as impressive today as when it was built in the 1930s. The numbers alone are mind-boggling — Golden Gate is 8,981 feet long and stands 746 feet high. Crossing the bridge can be a bit dizzying, but the views of the bay are worth it.

No trip to Yellowstone National Park is complete without a stop at the park’s most famous geyser, Old Faithful. Named by early Western explorers for its dependability (Old Faithful erupts every 35 to 120 minutes), an eruption from the geyser can reach up to 184 feet in height. It’s impossible to predict exactly when it’s going to erupt, so be prepared to wait for up to two hours.

An engineering marvel, the Hoover Dam is the tallest concrete arch dam in the U.S., standing at 726.4 feet high. Weighing 6.6 million tons, the dam contains 45,000 pounds of water per square foot at the base. An easy day trip from Las Vegas, it also provides great photo ops with the Colorado River Bridge and Lake Mead in the background.

Located in Yosemite National Park, the famous Half Dome is a must-see in your lifetime. The sheer size of this massive rock is mind-blowing; its famous shape results from being too tall for glaciers to carve out the upper portion. If you prefer to skip the notoriously dangerous hike to the top, watching the sunset over the monolith from the surrounding valley is also quite enjoyable.

One of the most recognized landmarks of American West, Chimney Rock was an important marker for pioneers traveling west on the Oregon Trail. When the pioneers saw this well-known landmark on the Nebraska prairie, they knew that the flat landscape of the midwest would soon give way to the steep, and more dangerous, Rocky Mountains.

Anyone who would like to learn more about the history of the South should visit Oak Alley Plantation in Louisiana. A National Historic Landmark, the plantation provides a glimpse into the Southern traditions of the past, including the sugarcane business and the lifestyles of wealthy Southerners in “The Big House.” In addition, it offers a reflective look at the bondage of slavery and its somber place in American history.

Nothing says “classic American landmark” like the Statue of Liberty. A gift to the U.S. from France in 1885, Lady Liberty has welcomed ships into New York’s harbor for over a century. Whether you pass her by on a sightseeing cruise or climb all the way to the top of her crown, this New York icon cannot be missed.

The first national monument in the history of the National Park System, Devils Tower is an imposing natural rock feature set amidst the Wyoming landscape. Although it is a popular spot for modern-day sports like rock climbing, the Devils Tower has long been a sacred place for the Native American tribes of the region. Today, these tribes still hold spiritual rituals and sacred ceremonies at the historic landmark.

One of the most impressive presidential monuments in our nation’s capital, the Lincoln Memorial is awe-inspiring from all angles. When illuminated at night, the formidable figure of our 16th president is breathtaking to behold. Inside the memorial, his statue looms large beneath the following inscription: “In this temple as in the hearts of the people for whom he saved the Union the memory of Abraham Lincoln is enshrined forever.” Indeed, it is.

Any trip to Charleston, South Carolina should include a visit to Fort Sumter. An old military fort famous for being the site of the first shots fired in the Civil War, it’s an especially enjoyable day trip for history buffs. A national monument, the fort may only be accessed by a thirty-minute ferry ride from the mainland.

Antelope Canyon is an otherworldly American landmark. Deeper than it is wide, the smoothed, curving walls, narrow passageways and beams of light within the canyon may evoke a feeling of quietude. Once inside, it’s easy to understand why this geological phenomenon is considered a sacred space by the Navajo people.

Monticello, Thomas Jefferson’s grand Virginian plantation, is a National Historic Landmark that offers a fascinating look into the past. The house, which was famously a work in progress throughout Jefferson’s lifetime, is an amalgamation of varying types of architecture. The grounds are equally stunning, with flower beds, a 1,000-foot vegetable garden and acres of cultivated land.

Perhaps not widely known outside of the whitewater rafting set, venturing down the Middle Fork of the Salmon River is the ultimate river experience. A 100-mile stretch of river in Idaho, the Middle Fork of the Salmon has continuous white water rapids, hot springs, world class fishing and incredible scenery. As one of the most coveted river trips in the U.S., this is one landmark that may be difficult to see during one’s lifetime. River permits are awarded by lottery through the Forest Service.

It may be hard to believe that this mammoth mansion was only a summer “cottage” for the Vanderbilt family, but it’s true. The Vanderbilt’s fortune started with Commodore Cornelius Vanderbilt, a steamship and railroad tycoon of the 19th century. The Breakers was built by his grandson, Cornelius Vanderbilt II, who commissioned architect Richard Morris to design the seaside villa. Of all the Newport mansions, the Breakers is the town’s most definitive landmark.

A wonder unto itself, Crater Lake was created thousands of years ago when a violent eruption destroyed Mount Mazama, leaving a volcanic depression in its wake. It took an estimated 250 years of rain and snow to fill the caldera, which formed the clear blue lake we know today. The ninth-deepest lake in the world, its deepest measured depth is an astounding 1,949 feet.

Of all of the skyscrapers to be visited in the U.S., Seattle’s Space Needle is one of the best. A 605-foot observation tower, it was originally built in 1962 for the World’s Fair. Now an indisputable landmark for the Seattle skyline and a symbol of the entire Northwest, visitors can get a fantastic view of the city and Mount Rainer from the sky-high observation deck.

The oldest working lighthouse in the state, the Portland Head Light is also the most photographed lighthouse in Maine. A visit to Fort Williams Park allows sweeping views of the lighthouse and the rocky coastline, complete with blooming rose bushes and idyllic footpaths for walking. To view the lighthouse from the sea, book a sightseeing boat tour from Portland.

At a staggering 20,310 feet high, Denali is the highest mountain peak in North America. If you get the chance to see Alaska in your lifetime, witnessing Denali in person is an absolute must. The mountain is situated in a national park of the same name that encompasses 325,250 acres of rugged Alaskan wilderness.

The oldest continuously-inhabited Puebloan community in the country, Taos Pueblo dates back a thousand years. A multi-level adobe structure made of earth, water and straw, this Unesco World Heritage Site is still home to 150 residents. Located at the base of the Sangre de Cristo Mountains and within the modern-day town of Taos, the pueblo is a visually-stunning piece of manmade architecture. Visitors are permitted, but make sure to check the pueblo’s website ahead of time for hours and visiting guidelines.

Home to the most famous incident in Texas history, the Alamo in San Antonio was the site of a bloody battle in Texas’ War for Independence. During a siege that lasted 13 days, Mexican troops attempted to reclaim the Alamo Mission, where the Texan rebels were garrisoned. Although the Mexican army won the battle, the Alamo remains the quintessential Texan landmark, representative of the state’s enduring spirit.

The southernmost point in the contiguous U.S. is marked by a large, colorful buoy in Key West, Florida. Boasting “90 Miles to Cuba” and made of concrete, this kitschy landmark is still worth a visit. For the best photo ops, make the trip around sunset. Not only will “magic hour” result in the best photos and gorgeous views, but the crowds will likely have dispersed by this time as well.

Arguably the most beautiful landmark within Grand Teton National Park, Jenny Lake is also one of the most visited. Its high visibility does not diminish its beauty, however, and whether you walk along its shores or go for a boat ride, you'll be happy you did. Named after the Shoshone wife of a fur trapper, the glacial lake’s icy cold waters make for a refreshing dip on a hot summer’s day.