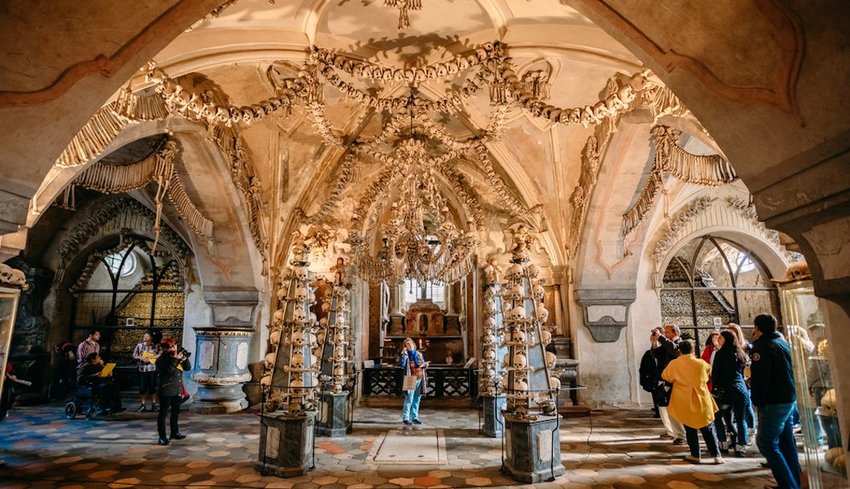 The dwindling daylight and drop in temperature that accompany the arrival of fall bring about a spooky mood — brewing perfect conditions for seeking out creepy experiences in some of the world’s most haunted destinations. While some sites are surrounded by local legends, others are haunted by gruesome history. These destinations promise visitors a bone-chilling experience. Check out the 13 scariest places on earth for some frightening travel inspiration.

The results of the world’s most devastating nuclear disaster are evident in the abandoned town of Pripyat in northern Ukraine. As a relatively young city established in 1970, Pripyat's nearly 5,0000 residents were evacuated after the No. 4 reactor at the Chernobyl Nuclear Station exploded in 1986. The residents of Pripyat were forced to flee within two days and the place has remained uninhabited ever since. The evidence of a once thriving community includes the iconic Ferris wheel at the town’s amusement park, dolls strewn across living room floors, and the clocks that stopped precisely at 11:55, when the town’s power was cut.

Inspired by loss and loneliness, Tsukimi Ayano returned home to her shrinking village of Nagoro in the valleys of Shikoku and began creating replica dolls of residents who departed for work in the cities or passed away. Displayed in various states of action, these life-sized dolls reenact scenes of everyday life in the village — fishermen eagerly awaiting their catch on the riverbank, keen students sitting through a lesson, and gardeners tending to their plots. With approximately 350 dolls in place and only 40 living residents, Nagoro has transformed into a quirky yet totally eerie toyland. Despite the sweet story behind their creation, there's something unnerving about these dolls.

Arranged in terrifyingly lifelike poses are roughly 8,000 corpses pinned along the walls of the Capuchin Catacombs in Palermo, Italy — making this place one of the world’s most unusual burial sites. Created in the 16th century, the space was intended solely for monks, yet when the site’s exemplary mummification process put itself on the map, the Capuchin Catacombs became a symbol of status for the city’s residents and a desirable final resting place. A bone-chilling walk through the site will reveal that the catacombs are separated into numerous corridors for religious figures, professional men, women, and infants — each one displaying mummies dressed in their best Sunday clothes.

Notoriously known as Suicide Forest, Aokigahara Forest, which sits at the foot of Mount Fuji, holds the record as the world’s second most popular location for suicides after San Francisco’s Golden Gate Bridge. Heartbreaking last letters and articles of clothing from the departed are occasionally found amidst the forest’s dense foliage. Its deafening silence radiates a naturally chilling feel, and it's believed that the paranormal activity generated by the forest’s tortured souls prevents many of those who wander into its depths from wandering out again.

As the site of the cleansing purge referred to as the Sook Ching operation in 1942, Changi Beach on the eastern side of Singapore conceals a grim past. Haunted by the harrowing screams of Chinese civilians who fell victim to Japanese soldiers, Changi Beach is known as a hotspot for paranormal activity. Urban legends tell of the discovery of headless bodies and countless urns on the sands that are dotted with bloodstains among sightings of shadowy figures after sundown.

Regarded as India’s most haunted fort, visitors to the 17th-century Bhangarh Fort in Rajasthan state are prohibited after sundown. Local legend tells of a tantric priest skilled in black magic who fell deeply in love with the beautiful Princess Ratnavati. After uncovering a love potion that he attempted to use to win her affection, Ratnavati threw the bottle and hit a boulder — crushing the priest as it knocked the stone loose. His last words were those of a curse directed to the princess, her family, and the fort. A battle between the Bhangarh and Ajabgarh armies was fought the following year, which saw the death of Princess Ratnavati. Though the haunted grounds of Bhangarh Fort are now in ruins, several structures including the royal palace and public chambers withstood the battle and the test of time.

Blessed by a handful of soil from Jerusalem that was strewn over the grounds of the Sedlec Ossuary, this Roman Catholic chapel nestled in the suburbs of Kutna Hora rapidly became Bohemia’s most coveted burial site. Housing over 40,000 bodies at one point, the Church of Bones sought a solution that allowed all who wanted to be buried there to rest in peace by employing local wood carver František Rint in 1870 to arrange the skeletons into ornate embellishments. Every human bone was artistically arranged into bone chalices, candelabras, and chandeliers for some of the world’s most macabre art.

Though millions of travelers descend upon Venice each year, Poveglia Island, which is only half a mile away, is strictly forbidden to visitors due to its ominous past. Throughout the course of history, Poveglia island was used for weapon storage by Napoleon and was the site of many small battles as well as a plague quarantine station. It is rumored that 50% of the island’s soil is human ash because so many of the deceased were burned and buried here during the Black Plague. Most recently in 1922, a mental hospital was operated by a maniacal doctor who butchered his patients  and then threw himself over the island’s belltower. Surrounded by a collection of twisted legends, Poveglia Island is considered to be the world’s most haunted island.

Infamously known as the hospital where Adolf Hitler healed from his war wounds in 1916, this former tuberculosis sanitorium southwest of Berlin has been left to decay after the fall of East Germany. Through the course of its existence, Beelitz-Heilstätten Hospital served as a neurological rehabilitation center, as well as a leading treatment facility for Nazi soldiers throughout World War II. Today, the interior of the hospital is adorned in graffiti by urban explorers and its exterior is covered in vines as the complex gives way to nature. Only the haunting remains of hollow hallways, paint-peeled walls, and rusty beds hold the grim wartime secrets of decades past.

Built in the 11th century, France’s tallest castle resides in the picturesque Loire River Valley, which is two hours southwest of Paris. Between the walls of the noble Château de Brissac lives its resident ghost la Dame Verte, or the Green Lady, an unfaithful wife murdered by her husband in the 15th century. She is frequently spotted in the tower room donning her green dress and is reputed to haunt the castle’s visitors with her deep moans and chilling face that features gaping holes for eyes and a nose.

The reported 12 to 16 ghosts that haunt the residents of Pluckley do little to diminish the town's reputation as a pretty English village with tiny cottages and a single cozy pub. Apart from the highwayman who was pinned to an oak tree by a sword on Fright Corner and the hanging schoolmaster, it is the Watercress Woman who draws paranormal investigators to Pluckley. Engulfed in flames by a splash of gin that caught the spark of her pipe, the Watercress Lady, who collected and sold watercress from the waters below, burned to death on Pluckley’s Pinnock Bridge.

Harboring a hidden stairway that descends into the netherworld, Stull Cemetery, tucked away in rural Kansas, is the world’s infamous doorway to hell. Though countless legends cite Stull Cemetery as the site of satanic cults and witchcraft, it is the tale of Lucifer once transporting himself from hell through a church in Stull Cemetery that makes this site the most evil in existence. The abandoned church that was used as his portal is now destroyed, but Lucifer traveled to and from the netherworld twice a year, on Halloween and Spring Equinox, to awaken the spirits of Stull Cemetery. The site posts half a dozen signs warning visitors to keep out after dark.

Island of the Dolls, Mexico

Julian Santana Barrera set up a home in a hut tucked deep in the woods among the floating gardens of Xochimilco and decided to live the remainder of his life in isolation. On arrival, he discovered the body of a young girl in the canals, as well as a doll, which he believed to be hers. In honor of the girl, he hung the doll on a tree, but began to be tormented by menacing footsteps and anguished wails during the nights. In an attempt to appease her spirit that had taken over the doll, Barrera collected and displayed a number of other dolls on trees around the island over the course of five decades, though most of the toys are mutilated. Daring visitors can reach Island of the Dolls on a two-hour canal ride from Mexico City to witness a forest draped in soulless toys with blank stares and severed limbs, which have been reported to whisper to each other.