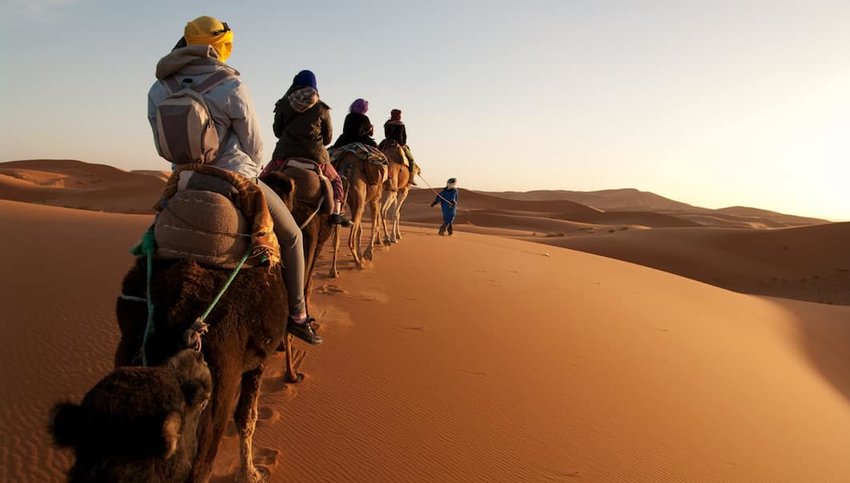 10 Unusual Trips for the Adventurer in You

How would you like to get off the beaten path and do something really extraordinary? The adventurer in all of us is just dying to get out and explore the world’s most fantastic destinations. Why hit the usual tourist traps and same-old vacation spots when you can look a hyena in the eyes, track elusive Mountain Gorillas in Uganda or drive your own husky team in the Arctic? Join us as we explore 10 unusual trips for the adventurer in you.

Climb to the Top of Agia Triada

The Holy Trinity Monastery or Agia Triada is one of the most difficult of the sky-high monasteries in Greece to reach but the trek is well worth it. Once you get to the top of Agia Triada, the panoramic vistas will literally captivate you. These Greek Eastern Orthodox monasteries were built on “meteora” stones, which roughly translates into “suspended in air,” in Greek. Building monasteries high on meteora stones was popular in the 14th and 15th centuries because the monks believed that they would be closer to God. You can get to the monastery by climbing stairs on the neighboring cliff and then taking a cable car across the chasm between the two cliffs.

Mountain Bike to the Roof of the World

There's nothing like the spiritual high you get from atop majestic Himalayan peaks and the spectacular vistas of Mount Everest are even more amazing if you're experiencing them from the seat of a mountain bike. Put your skills to the test by peddling challenging climbs, coasting down exhilarating descents and taking in the breathtaking scenery of Tibet. Explore the backcountry as you cycle past ancient temples, monasteries and remote villages that make up the culture and history of this remarkable part of the world. You will also meet warm and charming locals as you ride the trails of these sacred mountains.

Feed Hyenas in the Holy City of Harar

Harar is a city in Northeast Ethiopia near the Somalian border and a great seat of Islamic culture. Its walled city, dubbed “Africa’s Mecca,” is home to more than 100 mosques and is considered to be the “fourth holy city of Islam”. The unusual part of your trip to Harar is a visit to the legendary “hyena man of Harar”. At the Fallana Gate, the hyena man will call out to the hyenas by name in Harari. They will come up, one-by-one and take a piece of meat from a stick he has placed in his mouth. If you have the nerve, you can also take a turn hand-feeding these wildly beautiful, but dangerous African predators — don't worry, I did it and survived!

Kayak Around the Galapagos Islands

The 19 islands that make up the Galapagos are is as unusual as you can get. Located in the Pacific Ocean some 600 miles off the coast of Ecuador the Galapagos are surrounded by a marine reserve that has been called the “showcase of evolution.” This trip must be on any adventurer’s bucket-list of travel spots. You won’t find an island on the planet with a bigger melting pot of exotic marine species such as the pink land and marine iguanas and a myriad of unique birds like the Galapagos albatross. Kayak and snorkel with a variety of friendly wildlife, such as giant sea tortoises and playful sea lions for an experience you won’t forget.  The Galapagos Islands are a place where lizards swim, birds walk, and for once, humans don’t take center stage.

The Northeast Passage has fascinated adventure-minded travelers for centuries and the Russian waters have a mystical history and intrigue all their own. Until recently, very few passenger ships have ever completed the entire trek, but changes in summer sea-ice conditions have opened up the opportunity for a few lucky thrill-seekers to follow Polar explorer Erik Nordenskiold’s 3,000-mile route from Anadyr across the passage to Murmansk. This is a once-in-a-lifetime chance to spot unique wildlife and experience the charm and Arctic hospitality of local villages along the way. Responsible Travel is just one of the few outfitters that can take you on this truly unusual trip.

The chance to trek through the tropical rainforests of Uganda to get a glimpse of the rare Silverback Mountain Gorilla is a once in a lifetime adventure and the Bwindi Forest in Uganda is your best chance to meet them face-to-face. This lush environment hosts over 400 gorillas in 20 groups, called “troops,” but you will need to plan ahead if you want a chance at spotting these amazing primates because only a few tracking permits are issued each day. Book early and pay up front if you want to secure your chance to come within touching distance of the most amazing primates on the planet.

Search for Lemurs in Limestone Forests

The African island of Madagascar is famous for one thing—ring-tailed lemurs. If you want to spot them in a really unusual spot, take a trip to the limestone “needle forests” of Tsingy de Bemaraha. Here in northwest Madagascar, Mother Nature has done her magic and the effects of horizontal and vertical erosion have formed a geological oddity on an epic scale. The unique shapes of these rifts have created their own ecosystem and the undisturbed forests, lakes and mangrove swamps are the habitat for rare and endangered lemurs and birds. Not many tourists make this off-the-beaten-path trek, so you will likely have the place to yourself.

Benin is an exciting country in West Africa that is rich in history and culture like the fearless female army of 17th century Dahomey Amazons who were the inspiration for the Dora Milaje in the Marvel movie Black Panther. The real adventure begins when you head to the village of Ouidah to explore the visit the local traditional healer and visit the fetish markets where you will see ingredients used in making traditional medicines. If you arrive in early January, you’ll also experience the colorful annual voodoo festival, where worshippers from across Benin come to take part in a variety of ceremonies celebrating ancestral spirits. While you are in the area, check out Ganvie, the largest stilt village in Africa built entirely on a lake like an African Venice.

Explore the Sahara by Camel

Head to Morocco’s eastern Sahara Desert and the colossal sand dunes of Erg Chebbi for a thrilling desert adventure and a camel trek to a luxury desert camp. Play in the world’s biggest sandbox as you climb the giant 500-foot tall dunes for sand-surfing and experience the exhilaration of speeding around the Sahara in a 4x4. Join a camel caravan for a visit to the camp of Berber nomads and then indulge yourself amid the dunes at the Erg Chebbi Luxury Desert Camp.

Drive Your Own Team of Huskies

If a winter adventure of a lifetime is your dream, then pack your parka and head to the snow-capped forests of Pallas-Ylläs National Park in the far north of Finland to drive your own team of huskies. You will experience what it’s like to be truly off the grid as you stop at remote wilderness lodges along the trek. Relax in the traditional Finnish sauna to recover from your day on the trail. You will be responsible for caring for your dog team as well as helping with tasks around camp. This Arctic paradise puts on the best light show imageable as you marvel at the magical shifting colors of the Northern Lights that may be visible during your entire trip.