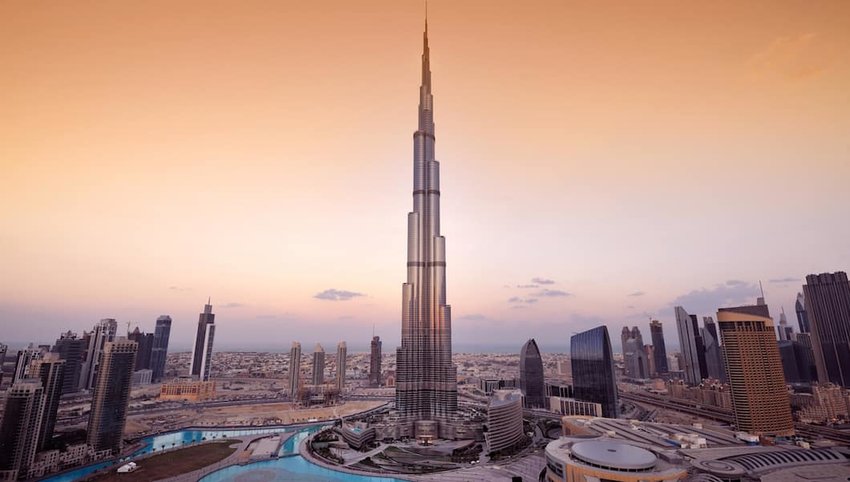 10 Things You Can't Miss in the United Arab Emirates

Set on the southeast end of the Arabian Peninsula, the United Arab Emirates is one of the powerhouses of the Persian Gulf. The federation of seven emirates evokes images of rolling sand dunes and the glamorous skyscrapers of Dubai, but there's so much on offer in this diverse nation. Here are 10 things you can’t miss when you visit the United Arab Emirates.

At 2,719 feet high, the Burj Khalifa is the tallest building in the world. Period. Visitors can ride the elevator up to the world’s highest observation deck and enjoy a drink with the spectacular view of the city. The skyscraper is an iconic part of the Dubai skyline, and though it attracts hundreds of visitors a day, it's well worth a ticket to experience this manmade marvel.

The Sheikh Zayed Grand Mosque in Abu Dhabi is a stunning architectural masterpiece, combining Islamic, Moorish and Mughal design to create a breathtaking house of worship. The massive mosque cost $545 million to build and sees as many as 41,000 worshipers during Eid, the Muslim holiday that concludes Ramadan. If you visit, wear loose-fitting, modest clothing (no shorts) and join one of the free tours that are offered daily.

One of the world’s most luxurious hotels (the world's only self-proclaimed 6-star hotel) Burj Al Arab Jumeirah is more than just a place to stay the night. It's one of the most popular tourist attractions in Dubai. Shaped like a boat sail high above turquoise waters, the hotel lives up to its luxurious hype. Guests enjoy services such as their own Rolls-Royce with a chauffeur, nine restaurants and bars, a private beach, five swimming pools, a waterpark, a spa and over two hundred suites. Even if you don’t stay in the hotel itself, it’s definitely worth snapping a picture or getting a reservation at one of the dining options.

Oman might better be known for hosting this mountain range, but the tip of the Hajar Mountains jut into southern UAE. If you're looking for an outdoor adventure, you can't miss out on these mountains, which are the highest on the Arabian Peninsula. Trek through the arid landscape, discovering archaeological sites like Bat and Al-Khutm, or seek out picturesque wadis to enjoy a break from the heat.

The Dubai Miracle Garden has been around since 2013 and is the world’s largest flower garden. But if you're expecting rows of tulips, you'll be in for a surprise. These gardens feature masterful floral sculptures from a life-sized Emirates A380 plane to a romantic hearts passage and an enormous floral clock. The park opens for the season in November, when the buds start to bloom.

Al Madam was once a small settlement about 37 miles away from Dubai. Today, however, it’s known as the “buried city.” The houses and mosque are covered in sand as the desert reclaims the cluster of buildings that are left. Locals believe that jinns, supernatural creatures, drove the residents away. Al Madam is a slightly creepy but very beautiful place to visit, and it will give you a feel for the desert that makes up much of the UAE.

With a stunning collection of contemporary and modern art, the Sharjah Arts Museum is one of the finest art museums in the country, and well worth the trip to the city of Sharjah. Much of the collection comes from Arab artists, making it a landmark stop for art lovers and casual visitors alike.

Home to the fastest roller coaster in the world, Ferrari World is an indoor amusement park in Yas Island (in Abu Dhabi). It’s the first branded Ferrari theme park in the world and features remote-control boats, vintage arcade games and beat-the-clock pit crew experiences are all part of the park. Not to mention some seriously cool cars on display throughout the park.

The Singing Sand Dunes of Liwa in Dubai are one of the world's magical phenomenons. According to local legends, the “singing” comes from evil spirits trying to confuse travelers and draw them out into the desert. In reality, however, the singing sound comes from the vibrations of the sand as it slips and falls on the sand dunes. The sand has been singing for many years — even Marco Polo heard it on his travels. An article from the National says the sound is hard to define, but describes it as “a double bass, a trombone and a didgeridoo… mixed with the roars of a low-flying aeroplane.”

The Dubai Gold Souk is a traditional market where almost 400 retailers sell jewelry and other enticingly golden items. Most pieces are sold by weight, but bartering is expected. Whether you plan to shop or not, the Gold Souk is well worth exploring, if just to window shop the stalls. The souk is open seven days a week and located near the Al Ras Metro Station in Deira.