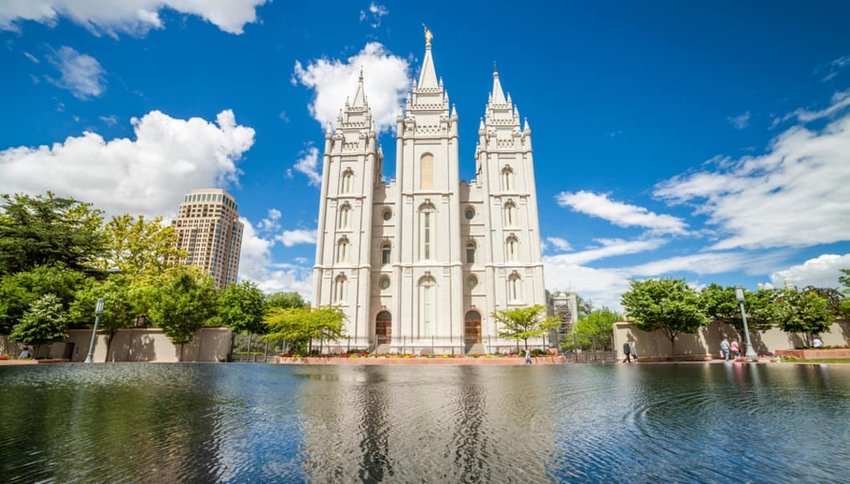 10 Sacred Sites in America Worth Seeing

For ages, people across all religions and belief systems have erected amazing structures that pay homage to a higher power. Throughout America, you will find an impressive display of gorgeous cathedrals, celebrated synagogues, magnificent mosques and other beautiful sacred sites that have both spiritual and historic significance. These spectacular places of worship will inspire you and leave you with a sense of peace and serenity. Check out our pick of 10 sacred sites in America worth seeing.

Head to Washington D.C. to see the sixth-largest cathedral in the world. This grand and historical structure attracts visitors from around the world to explore this elegant, neo-Gothic cathedral. With 112 gigantic gargoyles and 215 gorgeous stained glass windows adorning the Cathedral Church of Saint Peter and Saint Paul, this church is a sight to behold. Taller than the Washington Monument, the cathedral stands an impressive 676 feet tall. President Woodrow Wilson and Helen Keller are among the more than 200 souls interred here.

Opened in 2004, the BAPS Shree Swaminarayan Mandir in Bartlett is the largest traditional Hindu temple in America. It was constructed according to Shilpa-Shastras, ancient Hindu architectural design texts that have been an essential part of Indian architecture and engineering for thousands of years. The finished pieces were brought to northern Illinois from India after they were carved from Turkish limestone and Italian marble. The temple was then painstakingly built by 1,700 volunteers. Walk through the pictorial presentation “Understanding Hinduism,” an enlightening and inspiring exhibition on the Hindu faith.

The impressive majesty of the Church of Jesus Christ of Latter-Day Saints (LDS) Temple is definitely worth a trip to Salt Lake City to see. It was dedicated in 1893 and took 40 years to complete. It is interesting to note that it’s only the fourth temple built since the Mormon exodus from Illinois in 1846. The temple was constructed with large blocks of quartz rock that had to be dragged by wagon 20 miles to the construction site from Little Cottonwood Canyon. If you want to see the site, make sure you go before the end of this year because it will be closed for four years for extensive renovations.

On the corner of 5th Avenue and 65th Street, stands Temple Emanu-El, New York City’s landmark synagogue. With room for 2,500 worshippers, this storied synagogue is one of the largest Jewish temples in the world. The sanctuary is a brilliant display of gilded ceilings, colorful mosaics and dozens of stained-glass windows. The temple and its worshippers are part of a caring community whose members are devoted to lifelong learning, spiritual growth and social justice.

Sitting proudly on Embassy Row in the Nation’s Capital is the Islamic Center. This mosque and its cultural center opened in 1957 and the mosque one of the earliest built in America. For a long time, it was one of the largest mosques in the Western Hemisphere. Once you step inside, you will be amazed at the opulence of the interior. The mosque was built by an Italian designer using principals reminiscent of the great Ottoman architect Sinan.

Nearly 2 miles up in the Bighorn mountains of Wyoming, the Bighorn Medicine Wheel is an intensely sacred and spiritual place that stands as a powerful remnant of the great people that once called this area home. The medicine wheel is captivating with its 28 spokes (the number of days in the lunar calendar) pointing to the rising and setting places of distant stars. The spokes are aligned to the Sun at the summer solstice, Rigal in Orion and the Dog Star—Sirius.  There are few remaining medicine wheels in the US and are referred to as New World’s Stonehenge. They are not actually used in medicine but were built to honor the gods, seek divine wisdom and guide Native Americans in all parts of their lives.

San Jose, California is home to the largest Sikh temple in America. Gurdwara Sahib opened in 1984 and is a peaceful and serene place of worship to visit. The hall has room for 1,000 worshippers who come each Sunday for Diawan, the main service at the Gurdwara. There is a beautiful park on the grounds and Langar (food served in the dining hall) is available every day. All religious faiths are welcome to come and admire this amazing place of worship and spend some time learning about Sikh culture and tradition.

Stave churches are a style of medieval wood churches that once were common across northwestern Europe. The Chapel in the Hills in Rapid City, South Dakota is an exact replica of one such church, the Borgund stave church in Norway, and features stunning wood carvings created from the original blueprints from its Norwegian counterpart. The church, which was built in 1969, serves as a house of worship for the Evangelical Lutheran Church in America, serving both visitors and locals alike.

A trip to Atlanta has to include a visit to the Ebenezer Baptist Church, viewed by countless people as the mother church of the Civil Rights movement. It is a truly important and historic church solely because of the tie that the church has with Dr. Martin Luther King Jr. Dr. King delivered his first sermon at Ebenezer and was co-pastor of the church with his father from 1960 until his assassination in 1968. Dr. King’s funeral was held at the church. Today, the church is a National Historic Site and includes the King’s home and gravesite, as well as museums and memorials to civil rights movements around the world.

The Unity Church in Chicago was designed by renowned American architect Frank Lloyd Wright. This temple was built by Wright after the Unitarian Church he belonged to burned to the ground in 1905.  The Unity Temple opened in 1908 and defies the logic and design used in traditional churches. Designed in geometric shapes with towering domes and gold-leafed chapels, it totally reflects the ideals of the works of Wright. It’s modern and unconventional, but still evokes a spiritual and sacred feeling in everyone who enters this must-see place of worship. This National Historic Landmark attracts people from all over the world who come to witness the unique spirit of Frank Lloyd Wright.