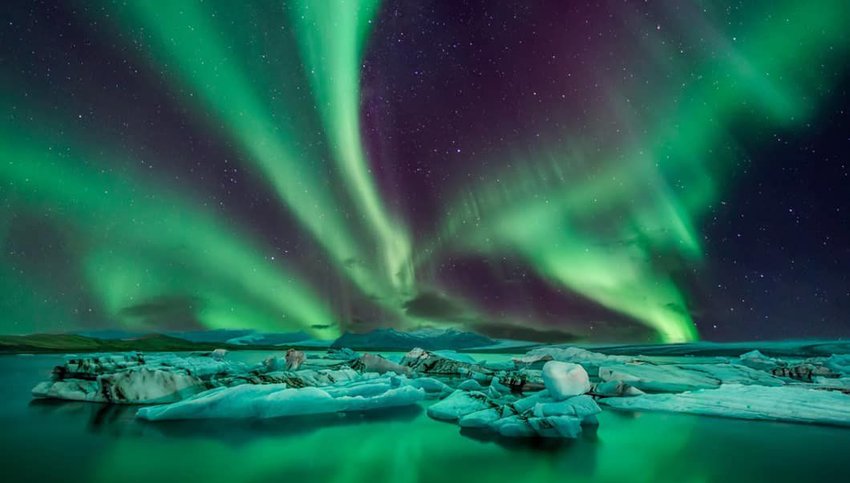 The world is a fascinating place brimming with awe-inspiring natural wonders. From rock formations to eerie ecosystems that baffle even top NASA scientists, Mother Nature has cooked up some pretty special sights. Whether you’re a photography buff or enjoy geeking-out on scientific terms, these destinations will have you believing in magic again.

Is there anything more magical than strolling a beach as waves peppered with neon stars crash on the shore? It's like watching a galaxy of shifting stars. When microorganisms in the waters near Vaadhoo Island combine with oxygen, they create a chemical reaction that produces bioluminescent microorganisms. The resulting glowing waves are truly a mystical sight to behold. The best time to visit this magical island in the Maldives is July to February with the best photo ops occurring during a new moon.

For centuries, this small Canadian lake rich in minerals has been known to possess healing powers, but that’s not its most notable quality. In the summer months, as the heat creates evaporation, it leaves behind circular concentrations of minerals on the lake’s surface. These rings in hues of green, yellow and blue will change in dimension and color as the evaporation intensifies, leaving a lake that looks like it's straight out of a Picasso painting.

Cave of the Crystals

Mexico is home to one of the most amazing natural mineral formations in existence. This cavern’s main chamber posses a collection of the largest crystals found in the world — some measuring up to 36 feet in height. Though these crystals are believed to have been growing for the past 500,000 years, the cave was only recently discovered in 2000. The magma creates such high levels of heat and humidity that most of the underground chamber remains unexplored. Sadly, the caves are closed to tourists but those determined to see these crystals in person can visit the Astro Gallery in New York City, where a sample is on display.

Located in the Saint Paul Mountain Range, this nearly six-miles-long subterranean river was recently named one of the New Seven Wonders of Nature. Visitors can explore the stalactite and stalagmite formations on boat tours and feel like they're journeying to the center of the Earth. The adventure has recently been enhanced with the discovery of waterfalls in an unexplored second floor of the cave.

Aurora is known for its rippling colors of pale green and pink hues sailing across the northern and southern hemispheres. This phenomenon is known as Aurora Borealis in the Northern Hemisphere and Aurora Australis in the Southern Hemisphere. These magical color formations light up the nighttime sky and are caused by a collision between the sun’s electronically-charged particles entering the Earth’s atmosphere. The best spots to view this natural wonder include Alaska, Canada, Greenland, Iceland and Norway. Aurora Australis is visible from Antartica and the southern Indian Ocean but are not as widely experienced. Winter is the best viewing time as the extended darkness enhances visibility.

Millions of years ago, volcanic activity in Northern Ireland created one of the most intriguing rock formations in the world. Giant’s Causeway is a cluster of over 40,000 black basalt stone columns positioned at the ocean’s edge. Over one million visitors each year make the pilgrimage to visit these pillars rising up from the shorelines of the Emerald Isle.

This series of sculptured caves in the heart of Patagonia are best experienced at sunrise or sunset when the sun’s rays illuminate the smooth walls. These chambers were created over centuries as water from General Carrera Lake patiently carved into the rock curating its soft curves and bends. Traveling to the cave is its own adventure which begins with a 2.5- hour flight from Santiago followed by a 120-mile dirt-road drive and ending with a boat ride.

Racetrack Playa is a large lake bed located in Death Valley National Park. This desert area exhibits a collection of puzzling trails created by the mysterious movement of hefty boulders. These rocks weighing several hundred pounds can leave a path up to 700 feet in length without anyone ever actually witnessing their movement. The trails can remain in the desert for several years before eventually fading. Scientists are unable to give a definitive answer as to the cause of the relocating rocks. The most reasonable theory is the melting of a ring of ice around the rocks making it possible for the strong winds to push the boulders.

Deep in Colombia’s Amazon is one of the most extraordinary waterways in the world. This colorful tributary is fittingly nicknamed Rainbow River for its pinkish-red hue combined with a bluish-green tint that creates a magical display of color running through the valley. These vibrant pigments are created by a unique plant formation growing on the river floor. The colors are dependent on the weather conditions of the season but the best time to experience this phenomenon is from July to November. Regardless of the time of year visitors will need to plan ahead to experience Caño Cristales River. A permit is required and a licensed tour guide must accompany travelers in an effort to preserve this majestic location.

The sprawling salt flats of Bolivia transform during the rainy season into a massive mirror, reflecting blue skies above and below against a stark white landscape. The largest salt flat in the world, Salar de Uyuni is what remains of a massive prehistoric lake that dried up and left behind unimaginable deposits of white salt. Exploring this unique landscape is magical no matter what time of year, but when the rains cover the flats in the thin layer of reflective water, the sight is truly breathtaking.