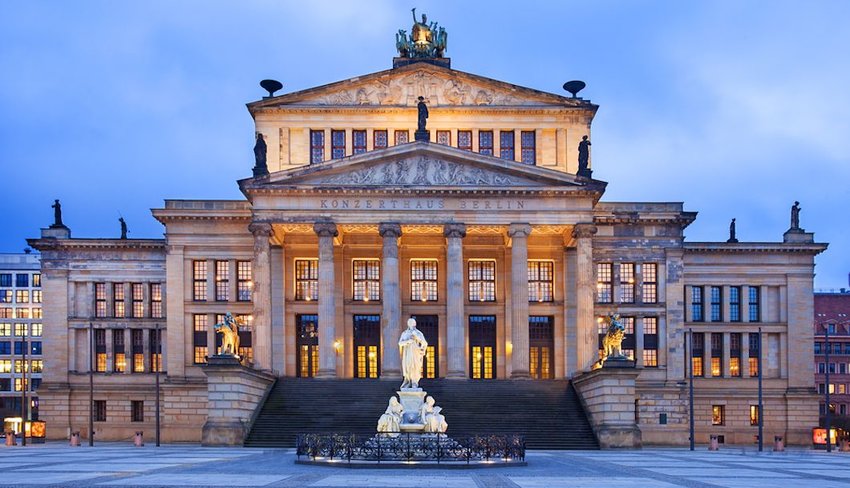 10 Beautiful Theaters Around the World

Witnessing live theatre is an unbeatable experience. Whether you prefer the ballet or the opera, Shakespeare or Broadway, live shows simply can't be beat. And these extraordinary theaters around the world add an extra element of allure to live performances. Here are 10 beautiful theaters you don't want to miss on your travels.

This floating theater on the surface of Lake Constance in Bregenz, Austria transforms into a series of magnificent stages each summer since 1946. Constructed in the aftermath of World War II, the Seebühne plays hosts to grand operas performed on wildly creative and unique stages. From a massive open book looked over by a partially submerged skeleton to a Chinese castle with rows of clay soldiers marching into the water, each set is perfectly suited to its production. The performances are part of the Bregenz Festival, which takes place every summer in July and August.

The botanical dreamscape that is Toronto’s Winter Garden was originally built in 1913 and restored in 1987 following more than 50 years of closure. The branches woven into the ceiling and the watercolor artwork covering the walls were meant to invoke the vaudeville spirit, and that spirit lives on long after the decline of the flagship art form. Winter Garden is the last operating double-decker theater in the world and the flora cascading from the ceiling transforms the space into a truly unique theatrical experience.

The Teatro La Fenice in Venice is a landmark of Italian theatre and the history of Italian opera as a whole. First built in 1755, the theatre still stands in all of its glory and hosts a number of operas, ballets, and theatrical performances. Its name, which translates to “The Phoenix,” could not be more apropos — the theater has fallen victim to fire a total of three times over the course of its history and most recently in 1996. Despite mixed reviews on the newest iteration, the grandeur of La Fenice is undeniable.

This theater turned concert hall in the heart of Berlin was designed in 1818 by the famous Prussian architect, Karl Friedrich Schinkel — further contributing to the timeless mark that he left on German architecture. Built to replace the previous theatre that had burned down in 1817, the hall served as a center for political events during the Prussian era and was rebuilt as a concert hall following extensive damage during World War II. Considered one of the best acoustical performance spaces in the world, the Wiener Konzerthaus now hosts an orchestra as well as operas and theatrical performances.

Built by Welsh and Cornish miners back in 1878, this opera house was originally abandoned when the mining industry in Central City, Colorado dwindled away. But following its restoration by volunteers in 1932, it now reigns on as the fifth-oldest opera house in the nation. Formed on strong musical traditions brought by founders from their homelands and designed by one of Denver’s premiere architects at the time, the Central City Opera House has hosted summer festivals ever since its reopening. Names of prominent Colorado pioneers, performers, and supporters of the arts are even etched into some of the seats.

As a tiny stage perched on dramatic cliffs, the Minack Theatre in Cornwall was originally opened in 1932 when the lady who owned the land, Rowena Cade, decided that it would be the perfect spot to put on theatrical performances. The theatre hosted performances each summer, while Rowena worked each winter making improvements to its infrastructure and design. Minack Theatre is now open for a full performance season each summer and traveling theatre companies from the United Kingdom and the U.S. put on cliffside plays with the beautiful backdrop of Porthcurno Bay.

The world-famous Bolshoi Ballet Academy can trace its roots to this grand Moscow theater first built in 1776 with the permission of Catherine the Great. The performances it has hosted over the years have contributed so greatly to the history of performing arts in Russia, that Bolshoi Theatre is widely considered a symbol of artistry. The building has undergone several extensive renovations and additions in its time — lending to the three different architectural styles present. Bolshoi Theatre has also hosted many historic premieres in Russia, including operas by Tchaikovsky and Rachmaninoff.

Surround yourself in the fantasy land of a Mediterranean courtyard under the glittering stars when you step foot in Tampa Theatre in Florida. Designed in 1926 as a movie palace, the theater was saved from demolition by a dedicated community in love with its unique personality. Audience members can continue to surround themselves with the romance of flowers, statues, and a beautiful night sky while watching films and live performances.

This open-air theater built into the slopes of the Acropolis in Athens has been around since roughly 160 A.D., and its purpose has never faltered. Although it was built in Greece, the amphitheater is distinctly Roman in architecture since it was built during the reign of the Roman Empire. Seated on one of the marble benches, it’s easy to imagine yourself as an audience member. Today, the Odeon of Herodes Atticus hosts some of the world’s most popular performers as well as festival performances and ballets, operas, and theatrical productions.

The unique jigsaw of various turn-of-the-century architectural styles makes the Palacio de Bellas Artes one of the most strikingly beautiful buildings in all of Mexico City. The inside of the hall is covered in murals from various artists, while both the façade and interior are adorned with delicate sculptures. The stained glass “curtain” along one wall creates a stunningly unique ambiance in the theater. Not one to discriminate in architectural style or artistic genre, the Palacio has played host to performance and exhibitions in music, dance, theatre, opera, literature, painting, sculpture, and photography.