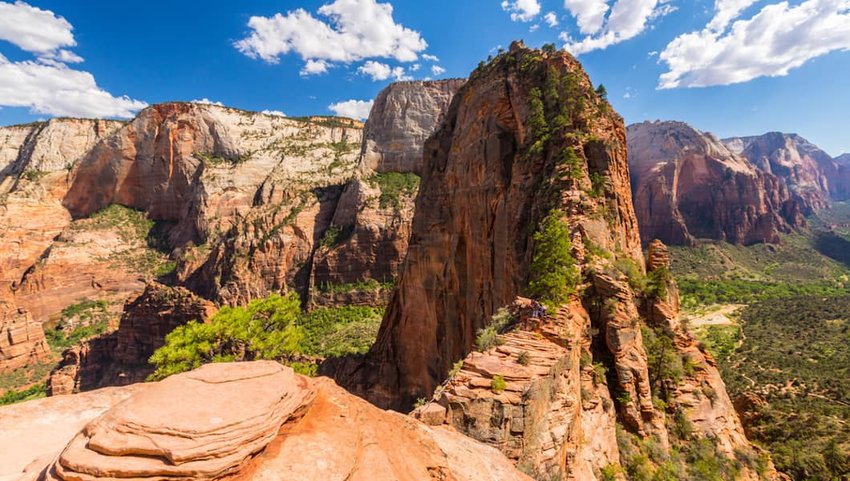 10 Insane Hikes Around the World

The world is full of mountains to climb, cliffs to scale and forests to trek through. Whether you consider yourself outdoorsy or not, hiking can be a great way to connect with some local nature and get your heart pumping. If you want to take a true walk on the wild side, though, here’s a list of 10 of the most insane hikes you’ll find anywhere in the world.

The Lost City of the Tayronas was missing for centuries before being rediscovered in 1972, only to endure decades of guerrilla warfare afterward. Today, however, anyone can make the hike — anyone, that is, who’s prepared to tackle one of the most physically-difficult treks in the world. The hike takes five to seven days and crosses indigenous lands and rivers (which get dangerous during the October-November wet season). The view at the top, however, is more than worth the humid walk. You can choose from the five tour companies that operate in the area to help you along the way.

Mount Rinjani is the second-highest mountain in Indonesia. It’s also an active volcano that last erupted in 2010. The summit of the mountain is 12,139 feet high and the hike takes either two days and one night or three days and two nights. Sleep at the base of the crater the morning before your ascent and then watch the sun rise over the Bali Sea. The best time to hike Mount Rinjani is from April to December (the park is closed from January to March).

Filled with breathtaking views that look like an oil painting, the Laugavegur trail hike runs from Landmannalaugar to Thorsmork and ends up where the Fimmvorduhals Volcano erupted in 2010. The hike is 47 miles long and takes six days to complete, with a 2,600-foot maximum ascent. Along the way, you’ll see mountains, glaciers, volcanoes, lava fields, obsidian rocks, hot springs and craters as a mere sampling of Iceland’s diverse countryside.

This four- to five-day hike in the Mnweni area of Drakensberg is isolated and beautiful — perfect for hikers who like to truly get in touch with nature. This journey is not for the faint of heart — hikers must climb two strenuous mountain passes, the Mnweni and Rockeries Passes. The sweat is worth it, though, with the view of the Pinnacles and Rockeries Tower. Hikers camp in caves and are advised to plan their trip sometime from March to May.

The Angel’s Landing hike is short (five miles round trip) and relatively well-trafficked, but its steep ascent certainly makes your adrenaline spike. The hike requires crossing a narrow sandstone ridge with support chains and, later, a steep staircase made of stone. It’s slippery, and eight people have died on the trail since 2004. For those cautious souls who aren’t scared of heights, however, Angel’s Landing provides some breathtaking views of Zion National Park.

“Via ferrata” is a general term for protected climbing routes in the Alps. Most via ferrata routes were created in World War I to transport troops and supplies to mountain bases. Typically, via ferrata routes involve cables, suspension bridges, ropes and safety hinges, and most take 5-8 hours to complete. If you’re feeling adventurous, pick the Via Ferrata Gerardo Sega, which takes you on a physically demanding seven-hour trip along the Preafessa waterfall.

Cascade Saddle is an alpine route that’s easily recognizable thanks to its Lord of the Rings cameo. It’s magnificent (think alpine meadows and lush valleys), but also dangerous thanks to the slippery rocks on the falls. The hike takes 4-5 days and runs from the West Matukituki Valley to the Dart Valley. You can expect ridges that are so steep they require you to use your hands to climb. There's also high water to ford and avalanche danger from June to November.

Block out an entire month on your calendar for this historical trek through Lebanon. The Lebanon Mountain Trail is made up of 27 sections that stretch over 292 miles and 76 villages total. It’s widely used by avid hikers and history buffs who want to get a glimpse into Lebanon’s culture and history. The Lebanon Mountain Trail takes stamina and isn’t for the easily intimidated, but the historical and natural landmarks along the way make it a worthwhile trek.

The Huayna Picchu hike takes hikers up the mountain that’s behind Machu Picchu, giving a unique view of the Inca ruins. A lower trail runs to a cavern with the Inca ceremonial Temple of the Moon. Huayna Picchu is filled with switchbacks, narrow rock tunnels and very steep steps. It’s relatively short (the full trail is three and a half hours), but what it lacks in distance it makes up for in difficulty. The benefit: You can get a picture of Machu Picchu that’s at a different angle than every other photo on Instagram.

This 11-mile trail runs along the Na Pali Coast on the island of Kauai and provides the only access to that part of the island. Along the way, the trail runs through sea cliffs, valleys, jungles and volcanic slopes. The trail is graded, but almost never level. The views are jaw-dropping, but so is the terrain. Streams and ledges have caused many deaths and injuries, with many hikers not understanding just how dangerous Kalalau really is. So take your precautions, and make sure to stop and take in the views.