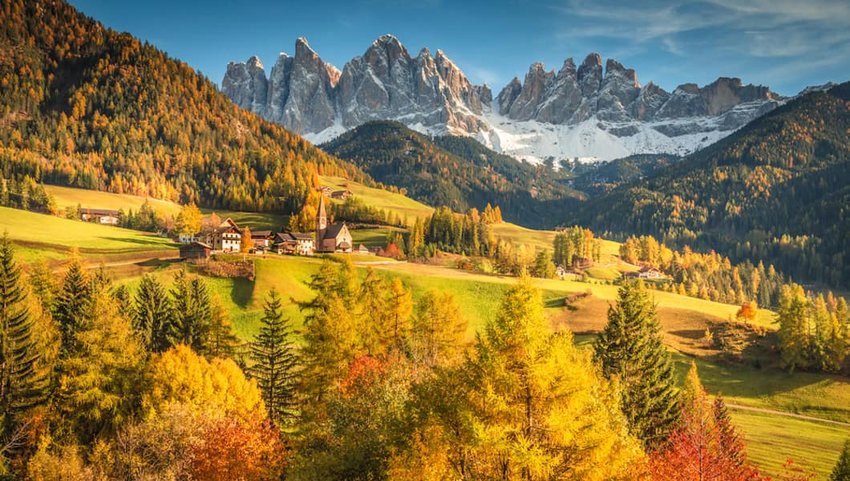 10 Fall Vacations You Should Book Now

As the weather dips towards the end of summer, fall will be upon us before you know it. Of course, by then, it will be too late to book that fall vacation you've been looking forward to. Consider this your early bird reminder to plan your fall getaway now, while everyone else is still firmly planted in summer. Here are 10 fall vacations that you should plan today —  before they’re booked up.

A Mountain Road Trip through Vermont

Vermont is an iconic autumn destination that attracts visitors from all over the world. Not only is this state one of the best spots to see some seriously gorgeous foliage, but it’s also full of charming small towns, beautiful farms and cute bed and breakfasts that cater to laid-back visitors. For an unforgettable road trip, start in the southern town of Wilmington, and journey north through the mountains on scenic route 100 all the way to the Canadian border for 217 miles. Highlights include the towns of Weston, Ludlow and Stowe, where you’ll find Mt. Mansfield, Vermont’s highest peak. The best time to see fall colors in Vermont is between early and mid-October.

Cheers at Oktoberfest in Munich, Germany

More than six million people flock to Munich each year for the world’s largest beer festival, which is held annually from late September to the first weekend in October. Oktoberfest has been celebrated in Bavaria since 1810, and while there are many such festivals around the world, none can compare to the original. Six Munich breweries are featured during Oktoberfest, including Augustiner, which has been brewing beer since 1328. You will also find every manner of food, from bratwurst to vegetarian options, as well as live music, dancing, and amusement park rides.

Did you know that Asheville and the surrounding mountains have one of the longest fall foliage seasons in the entire world? You can visit any time between late September and early November for spectacular fall colors, with the most vibrant scenery popping up from mid-to-late October. One of the best places to see fall color is on the grounds of America’s largest home, the Biltmore, which features sprawling gardens on an 8,000-acre estate, a winery and a luxurious inn. Be sure to spend at least a day driving along the nearby Blue Ridge Parkway, where the vistas are sweeping and the hiking is magnificent.

For the ultimate mountain vacation destination, head to the northernmost part of Italy, where the craggy Dolomites form impenetrable peaks backing picturesque villages that embrace visitors with open arms. The highest peaks may already be snowcapped in early autumn, but the valleys feature deep blue skies, local cattle drives, harvest festivals and golden foliage. In the Eisacktal Valley, you can celebrate the popular harvest tradition of Törggelen, where locals enjoy roasted chestnuts and annual feasts. The breathtaking geography includes lush alpine meadows, sprawling vineyards, huge peaks and the medieval city of Klausen.

Check out the Golden Aspens in Breckenridge, Colorado

Starting in late September, the forests of aspen trees in and around Breckenridge, Colorado will change from verdant green to deep gold. Crisp autumn days are perfect for scenic drives, hiking and other outdoor pursuits that are abundant around town. For spectacular autumn scenery, be sure to drive the iconic Boreas Pass Road, which ascends from downtown Breckenridge to over 11,400 feet. From here, you can see all of downtown, the Breckenridge Ski Resort and the surrounding mountains. Downtown Breckenridge features more than 160 unique shops, fine dining and delightful craft breweries.

One of the largest and most popular lakes in Western Europe is nestled in the mountains between Switzerland and France. Lake Geneva is a crescent-shaped lake known for its posh resort towns and beautiful alpine scenery. The world-famous vineyards in Lavaux, right on the sloping banks of the lake, are UNESCO-protected. The vineyards are lovely throughout the year, but in autumn the golden grapevines cover the terraced hillsides for miles and there are walking paths that lead from village to village with views of Lake Geneva and the surrounding mountains. This is the perfect home base for wine tasting adventures, as well as cruising Lake Geneva. Temperatures are still relatively mild in September, and the summer crowds will have disappeared, allowing you to explore in peace.

While many flock to Japan for cherry blossom season, fall is one of the best times to visit this country. The weather is mild and pleasant, the leaves form colorful canopies around the city and there are numerous festivals and special events. The traditional Japanese gardens are perfect for enjoying autumn colors. Be sure to check out the Meiji Jingu Gaien, which features a famous ginkgo-lined street that becomes a glittering golden tunnel in the fall. Visit between mid-November and early December for the Jingu Gaien Ginkgo Festival, which celebrates the ginkgo trees, and indulge in some local food and merchandise.

Relax on the Beach in Maui, Hawaii

Most of Hawaii’s visitors arrive during the busy summer season, but there are so many benefits to an autumn vacation on Maui. The weather is pleasant year-round on the island, and in November, the humpback whales start making their appearances. You can view the whales from the shore, but for the best experience, book a whale-watching cruise well in advance. The first weekend in November brings the annual Made in Maui Festival, which is the biggest shopping event of the year — featuring live entertainment, vendors, and food trucks with local cuisine. Of course, you can’t visit Hawaii without hitting the beach. Black Sand Beach in Waianapanapa State Park features a lava tube, sea stacks and a large seabird colony but you can't go wrong with any of Maui's sandy stretches.

If you live in the northern hemisphere, you may want to consider swapping seasons and enjoying spring in Queensland — home to more than 7,000 kilometers of coastline and the iconic Great Barrier Reef. This is the world’s largest coral reef system, and it’s home to thousands of marine species. Spring is when the coral begins its annual spawning and the local birds engage in colorful mating rituals. Stop through Cairns, a laid-back coastal city with plenty of outdoor fun. In addition to the Great Barrier Reef, be sure to check out the Wet Tropics Rainforest — the oldest rainforest in the world.

Celebrate the Day of the Dead in Oaxaca, Mexico

Visit the colorful city of Oaxaca in central Mexico during the end of October to celebrate Dia de los Muertos, or Day of the Dead. This three-day celebration is when spirits reportedly travel from the land of the dead to visit their living relatives. This is a festive holiday, featuring altars with candles, sugar skulls and photos of the departed, as well as special culinary treats, music, and parades. Authentic Day of the Dead tours are offered throughout the city, but be sure to book early, as they often fill up.